↓ Skip to Main Content
Home › Uncategorized › My First Quack at It

My First Quack at It

An Initial Song Plot: Sing Ducks Sing
I re-read Burke’s play, Ducks on the Moon (2010) last night; I will likely continue to do so, as I continue to work on our Art-Based Educational Research project. Ducks is a one-woman 90 minute play; it seems reasonable to keep it a one-woman show, so I am looking at possibly 4-5 songs. Mandelbaum’ s caution resonates: avoid a “ ‘chop and drop’ job, with the original play cut down to make way for the [songs] (1991 p. 178). And at the same time, Frankel (2000, p. 22) reminds me that “songs take over most of the main points of the plot.” So I must ask myself:

What is the central struggle in this drama, the central I Want?, and is there anything missing from this struggle that songs might add? And still in this context, what is missing particularly in the high points.

Burke’s struggles with how to cope with a child that is decidedly different than her other children. She is an experienced and knowledgeable parent:

Acceptance then are is the big I Want and I Am messages of this musical. In terms of the layers of educational import; obviously this play is particularly useful for understating parent/professional relationships in the context of students with ASD—not the least of which may be how parental self-efficacy may be impacted, perhaps particularly if the child is not first-born. Given these contingencies, here is my initial song plot: 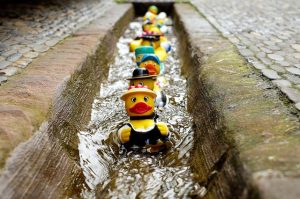 1. A breathing calming song; a blowing out the birthday cake candles song. An implied duet. A breathy, small and simple song.

2. I Want Song/Metaphor Song. What may be missing from the current play is a portrayal of how ASD may present, of what ASD is, in real time, not a recollection—more specifically here, a depiction of the real-time struggle, of a parent wrestling with a son with (for most of the play undiagnosed) ASD in an attempt to plan for and control the un/known.  This may be going out on a limb, but Kelley Jo Burke and I have discussed using something akin to the Weather Network as a metaphor for ASD; in ways this is apt since many people with ASD appreciate all the numbers inherent in today’s weather forecasts; including temperature, degrees, wind chill values, wind speed and direction, precipitation accumulations and kinds, UV index, 5-day forecasts, historical daily high and low temperatures, etc.

However, I must remember that this is a play about Burke’s struggle. So, if using a weather network kind of metaphor, perhaps casting the protagonist as a live meteorologist who makes forecasts that are completely inaccurate. She could be reporting form the field…something like “called for a 1.5 cms of snow and I am here in 60km/h blizzard”. “Wendy the weather girl” Possibly.

3. Diagnosis Dance ~or~ Diagnosis on Ice. This could introduce movement into the piece; for some reason I am leaning to the concept of ice-dancing or figure-skating as opposed to ballroom dancing. In my brain I think of ice-dancing as being weather-related, though I have no reason why to make such an association.  This could be an upbeat song, like a tent pole song, although it comes early in the play.

4. Clue: The Song of Clue. Burke discusses throughout her play the many clues that became obvious in retrospect, as may often be the case in situations such as these.  This could be another comment/metaphor song. It may be possible to keep a similar form as the one many are familiar with, as…. “Colonel Mustard did it in the Conservatory with the revolver.” I am thinking that this may be quite similar to the Diagnosis Dance; however, unless I take steps to prevent this.

5. Finally, several times in the play, Burke (2010) says “This is the last time I will feel this way for the rest of my life…” (p. 28). There is a lament there; at the same time, there is possibility; there is future. My feeling is that this could be an effective song; if done correctly, it could capture the myriad emotions that thread through the play. It would be conceivable to draw upon images of things that Burke did as a parent with her other children—things that were not as successful for Noah.

And that, Ladies and Gentlemen is my first go round of a Song Plot for “Sing Ducks Sing” ….stay tuned for the first song draft….