Our Story Began in these Seats

Challenge 2 of the 4X4 SAC Songwriting & Blogging Challenge 2016
Lyrics and Storytelling
By Bryan Potvin
Challenge: Write a song that tells a story. It can be in any genre. This is a very lyrically driven song that heavily relies on a story arc and timeline with characters, conflict and resolution. 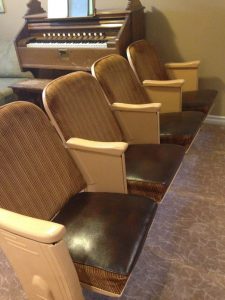 I feel as though the Week 2 Challenge is a perfect opportunity to work on a song that in many ways feels like a gift to me. A friend and colleague told me her story a few months ago and I have been waiting to write a song about it.

My friend and her (now husband) met in small town Saskatchewan, where they both lived. They started going to the movies together at the Falcon Theatre, (the only movie house in their town) and it became a standing Friday night date. They married and have been for 32 years.

Recently, the Falcon theatre underwent renovations, and her husband purchased their exact Friday night seats, restored them, and put them in their own movie/rec room. What a lovely and heart-warming story! (see the actual seats left)

… and here are the words
Our Story Began in these Seats
Words & Music: Scott Anthony Andrews ©2016

Verse 1
Male: Pardon  me, is this seat taken now?
Pardon me, cuz I’d like to get to know you somehow
Female: Theres’ no one sitting here with me
No one, at least until now
Both: We’re just waiting with wide-eyes
For the red velvet to rise

Verse 2
Male: Pardon me, as I curl my arm around you
Pardon me, ‘cuz I want to feel a little closer to you
Female: I like your arm as it hugs my back
You feel like the hero to me
Both: We’re just learning scripts like stars do
Hoping our lines will come true

Verse 3
Male: Pardon me, but sir, you are in our spot
Pardon me, it’s like a standing reservation that we’ve got
Female: The Falcon theatre; our Friday night thing
Thirty-two years, it’s called us to love
Both: So we brought our seats home
For a movie all our own